The Chemistry of Food

Superior Gluten Free Pancakes
Serves: 3ish people
Prep and cook time: 40ish minutes
Personal commentary
I don’t eat gluten. The problem with that is gluten is a protein in wheat products that makes them sticky and fluffy. Growing up my sister (who does eat gluten) refused to eat gluten-free pancakes because she did not like the texture or fluffiness. Today, we are going to prove her wrong by making the most delicious fluffy gluten-free pancakes! I like to use the basic pancakes recipe from The Joy of Cooking as my base because (according to my sister) it makes the absolute best regular pancakes. Today we will replace the regular all-purpose flour with all-purpose gluten-free baking flour and adjust the way we prepare the pancakes in order to increase fluffiness.

Ingredients
Wet: Dry: Topping Recommendations: Note: You can use up to a cup of sugar if you like your pancakes sweeter. If you add more than a cup it will start to impact the texture of your pancakes. I find that 3 tablespoons of sugar tastes the best! You can also add flavoring like orange or lemon zest without affecting texture. If you add ingredients like squashed bananas, blueberries, yogurt, strawberries, or chocolate chips your pancakes will be denser and less fluffy, but they will be flavorful and delicious nonetheless. I honestly enjoy a chewier pancake myself.

Materials
Instructions Note: As soon as ingredients are fully combined stop mixing! Mix as little as possible.
The Experiment and the Science
When I started this I wanted to discover if it was possible to make gluten-free pancakes as fluffy as normal pancakes. My hypothesis was that I could indeed make gluten-free pancakes that were as fluffy as regular pancakes. Normal pancakes are fluffy because the gluten in wheat traps air bubbles in the batter. When baking soda is heated up it goes through thermal decomposition, one of the products of which is carbon diyoxide gas. When you mix your pancake batter the gluten proteins bond together making a tight protein network that traps the air bubbles from the baking soda. I tried to recreate this process by replacing gluten with egg protein.
“When an egg protein is exposed to an air bubble, the protein is still exposed to the water. This causes the protein to uncurl so that the water-loving parts are immersed in the water—and the water-fearing parts can stick into the air. Once the proteins uncurl, they bond with each other, creating a network that can hold the air bubbles in place, when this network forms it is called binding or coagulation and the result is a foam. Whipping or beating the egg whites break the chemical bonds that hold the chains in its original ball form, allowing them to uncoil into their original long strands. When you heat these captured air bubbles, they expand as the gas inside them also is heated. Treated properly, the network surrounding bubbles solidifies in the heat, and the structure doesn’t collapse after the bubbles burst”. https://www.giapo.com/the-chemistry-of-egg-whites/
I started my experiment by making a batch of normal pancakes using The Joy of Cooking recipe. Then I made a batch of gluten-free pancakes using the process above. Once both batches were cooked I cut 8 regular and 8 gluten-free pancakes into 2inch by 2inch squares. I made sure that each regular pancake had the exact same volume as its gluten-free counterpart. Then I measured their weight making sure each pair’s volumes were matched up.

Blind Taste Test
Then I served the pancakes to my family for dinner and conducted a blind taste test in the process. I had my sister taste a bite of each set of measured pancakes and tell me which one tasted fluffiest. She did not know which pancake was normal or which was gluten-free. It turns out that pancake density and pancake fluffiness taste directly correlate. 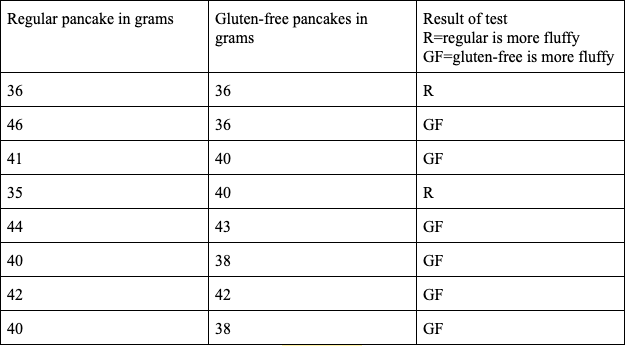 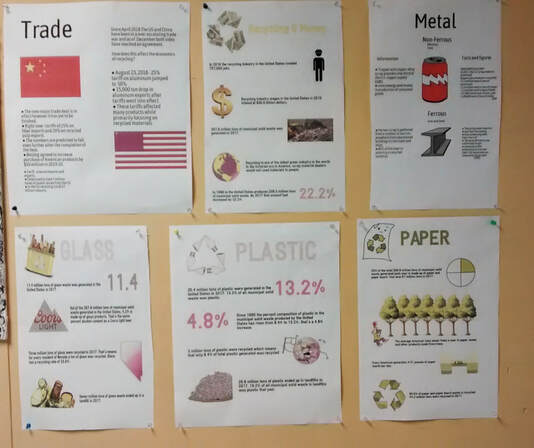 
How do the choices we make as consumers (purchasing, use, reuse, recycling, and discarding of materials) impact our local community and environment, and the global community and
Environment?
People don’t realize how much waste we actually produce. In the year 2017 as a country, we produced 267.8 million tons of solid waste. When you chose to buy packaged goods that packaging has to end up somewhere and what we are lying to ourselves about is that it won’t mostly end up in the landfill. Even things we don’t realize aren’t recyclable, like thin plastics ex. strawberry containers. When our recycling goes to the recycling center, the items that are actually recyclable have to be picked out of the trash. A lot of what goes to the recycling center actually ends up as trash. When people contaminate the recycling stream the process of separating and processing the recycling becomes more expensive therefore increasing the cost of recycling overall for the individual.

What else did you learn through this project?
I learned a ton during this project. To start off, just basic chemistry like how to read and interpret the periodic table and periodic trends like how atomic mass increases and how atoms gain and lose electrons. I also learned a lot about recycling. I learned that some things that say they are recyclable aren’t actually, like strawberry containers. I learned that when substances that decompose do so abiotically they produce methane gas that is actually worse for the environment than plastic in landfills. During this project, I was exposed to chem labs which was a very cool experience. I learned about spectroscopy during labs and chemical formulas and lab safety.

Process/Procedure:
Our first step was to measure the weight of the container that would hold our mixture. We weighed it in order to avoid any confusion around the weight of the mixture itself(as a precaution). Then we zeroed out the scale and measured 9.7g of the non-challenge mixture. Then we weighed a sample plate in preparation for the removed iron filings from the mixture. To remove the iron fillings we covered a magnetic stirring strip in plastic wrap so we could remove the iron fillings from the mixture using the magnet and also be able to remove them from the magnet once separated from the mixture. Then we measured the separated iron filings and subtracted the weight of the petri dish to determine the weight of the fillings. We should have zeroed the scale out to the right of the petri dish but we didn't think about it. Our next step was to ‘separate the peppercorns from the mixture. To do this, we again measured the weight of a petri dish to put the separated peppercorns in. Then we used forceps to grab the individual popcorns. We were able to use forceps because of the peppercorns' macroscopic size. We proceeded to weigh the peppercorns. After that, we were left with a mixture of potassium aluminum sulfate (alum) and silicon dioxide (sand). We put the remaining mixture into a beaker with 30ml of room temperature water. The effect of this was that the alum dissolved. Then we poured the mixture through filter paper, to sift out the sand, into a second beaker. We then dehydrated the damp sand still on the filter paper in the oven order to remove any non-sand weight from the specimen (to stay precise as possible). We weighed the sand on a petri dish.
To get the alum back out of the water we dehydrated it on a hot plate and on the hot plate until it was back to a sticky powder form. Then we moved the leftover powder into a sealed container. We measured the weight of a third petri dish and zeroed out the scale so we could measure the dehydrated alum weight on our petri dish. Then we used our calculations of how much each component weighed and divided them by the weight of the total mixture (9.7) to find out what the percent composition of the mixture was made up of what component. 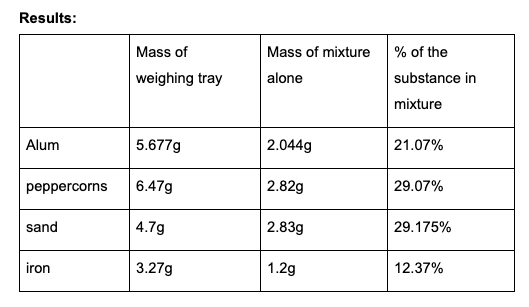 Conclusion:
The task of this lab was to determine the percent composition of the mixture. We did this by separating the individual substances weighing them and dividing the individual substance weights by that of the total mixture weight.
Our methods were definitely not good enough to be used in any professional setting but, within the context of this lab were sufficient. By this, I made that what we did was generally correct in theory (we did achieve the goal of separating all the materials of the mixture) however, we did end up losing 7.685%  in the process. Our method was not fast enough to get us 100% completed within the allotted time. We could definitely have gone faster. I do believe that the errors in both timing and precision, were due to our inexperience. It was not particularly challenging though which was to our benefit.
As stated above we lost 7.685% or .07685g during our experiment, specifically when transferring substances from container to container. When we were pouring our mixture of alum dissolved in water and sand through the filter paper, there was sand residue left in the original container so, we lost some mass in the sand there. Also, after we had re-dehydrated our alum it was stuck to the bottom of the container. I believe that we lost some mass in alum during the process of removing it from the dehydrating container. It is reasonable that the combination of these two loss points makes up the missing 7.685% mass of the total original mixture.
Our results were quite different from the expected results I believe that part of the reason that our results differed was not even error but because the percent composition was actually indeed different.  For example, our mixture had many peppercorns, 29.07% to be precise and Chris’s mixture had only a single peppercorn in it. The individual materials within the mixture were apparently not evenly distributed. This would automatically skew out results. However, I could be wrong and the error was our fault. The predictor percent composition of iron was 22.5% our results were 12.37%, this is a 10.13% loss. he predictor percent composition of the sand was 39.4% our results were 29.175%, this is a 10.226% loss. The predictor percent composition of the alum was 26.8% our results were 21.07%, this is a 5.73% loss. The predictor percent composition of the peppercorn was 11.3% our results were 29.07% this is a 17.77% gain. If you have too much peppercorn, because it is unequally distributed then every other percent must be too little.Two reasons that we could have been incorrect could have been that our masses were different due to loss while transferring substances from container to container or we had an error when we were measuring mass.
Given the chance to reduce this experiment I would improve our methods by being way more careful about transfers. I believe that our 7.685% loss in mass was due to discrepancies during container transfers where the popout be to dehydrate a substance or put it in a weighing container. Secondly, I would remember to use distilled water to dissolve out alum instead of using tap water.
Questions for Further Thought: